After a year of great shifts in the social media landscape, Facebook may not be quite as dominant as in years past. But it’s still the most-used social platform worldwide – by far.

In this post, we reveal 42 need-to-know Facebook statistics, updated for 2023, to help your brand understand what’s happening with Facebook right now, as well as how you can take advantage of changing demographics and advertising moves.

Download our Social Trends report to get data from over 10,000 marketers that you can use to plan a viral-worthy social strategy in 2023.

Despite going through a tough year in 2022, Facebook remains the most used social platform worldwide. For marketers trying to reach almost every demographic, Facebook is a required component of a social marketing strategy.

3. 70% of Internet users are active on at least one Meta platform

Out of 5.3 billion global Internet users, 3.71 billion people use at least one Meta app every month: Facebook, Instagram, Messenger, or WhatsApp. Many use more than one.

In this post , we focus specifically on Facebook itself, but since there’s so much cross-pollination in Meta platforms, it’s good to understand the bigger picture, too.

4. Facebook is the 7th most valuable brand in the world

Meta’s stock price had a bumpy ride in 2022, but Facebook’s brand value remains strong. (Brand value is a marketing term that represents the value of the brand itself – it is not the same as stock value.)

Facebook lands behind huge brands like Amazon, Google, and Walmart to land in 7th place for 2022 with a brand value of $101.2 billion. Apple holds the top spot with an estimated brand value of $355.08 billion USD.

Only Google and YouTube get more visits. This is just the web version of Facebook, so this doesn’t even include app use. On that note…

6. Facebook is 2nd-most-used global app based on total usage time

7. Over 1 billion Stories are posted every day across Facebook apps

Mark Zuckerberg has said that he expects that percentage to more than double by the end of 2023. That’s loads of potential for brands to get in front of new audiences organically. All the more reason to stay on top of the latest changes in the Facebook algorithm.

9. 67% of monthly users are active daily

Having a strong cross-platform campaign strategy will ensure you deliver the right message on each platform.

But, as you’ll see in the next few Facebook stats, the platform’s reach is not universal across all adult age groups.

12. Facebook is the favorite social platform of the 35-44 demographic

It also comes in tops for male Internet users aged 25-34, although women in that age group prefer Instagram. (Facebook currently limits its gender reporting to male and female.)

If your target market includes these demographics, Facebook is an even more important place for you to connect.

And 25% plan to spend less time on the platform.

Since generational age ranges can vary, let’s specify here that Gen Z in this case is defined as users aged 18 to 25. Seven percent is hardly a mass exodus, but it does indicate changing user patterns that marketers should keep an eye on.

It’s always a good idea to learn about your specific audience’s behaviors through research and testing.

That’s the lowest of all the social platforms, and a sharp decrease from 30% in 2020. That matters, because users are more likely to click on ads – and especially to use social commerce features – on platforms they trust.

15. Users spend an average of 19.7 hours a month on Facebook

That comes in third behind YouTube’s 23.4 hours a month and TikTok’s 22.9 hours. It’s substantially more than Instagram’s 11.7 hours per month. This Facebook statistic is for Android users only but it’s still indicative of industry patterns.

While the global monthly usage Facebook stat above has the platform in third place, it actually comes in fifth for daily use time by American adults. For this stat, TikTok rules the roost with nearly 46 minutes of daily time spent. 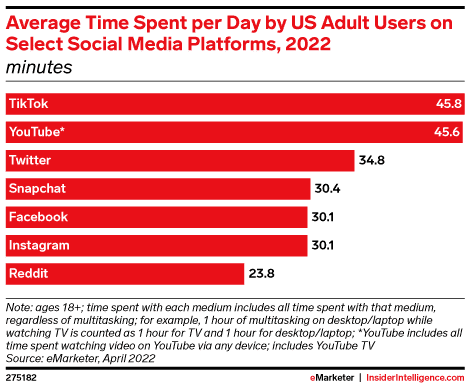 Of course, statistics on Facebook use vary by country. For example, UK users spend 42 minutes per day on the platform, compared to 49 minutes a day on TikTok. 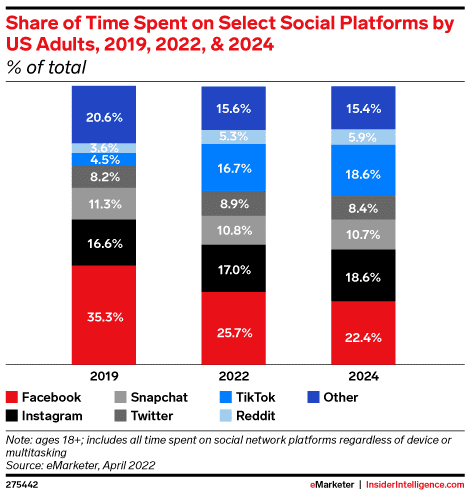 But don’t let shifting usage patterns drive you to make major changes in your strategy without planning and testing. Yes, Facebook is losing time to TikTok, but it still represents more time spent than any other social platform, and will continue to do so through at least 2024.

While that’s declined from 36% in 2020, it’s still much higher than any other social network. YouTube comes in second with 25% of Americans regularly getting their news there.

People expect to hear about important events on Facebook, including the latest news from their favorite brands.

More than half of of those posts (52.5%) are link posts.That’s followed by:

However, the rate varies substantially among post types, which may be a good reason to reconsider your content mix. Photo posts get the highest engagement at 0.12%, followed by:

Engagement rates also vary significantly based on the number of page followers, with small pages getting the highest engagement. 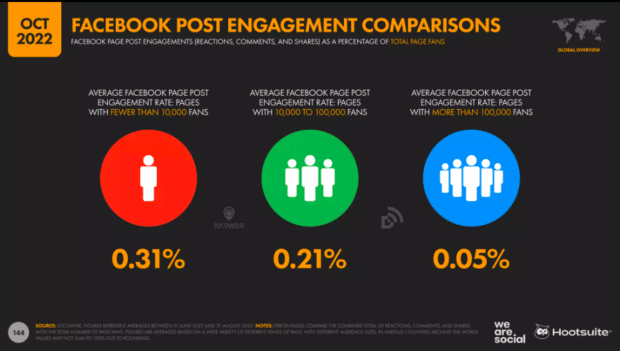 21. 1 billion users message a business on the Facebook family of apps each week

Ignoring your DMs is no longer an option (check out the next stat for proof). If you need help keeping track of incoming messages, try a tool like Hootsuite Inbox or Sparkcentral.

22. People are 53% more likely to buy from a business they can message

This is a powerful feature, although it’s limited to only Facebook Messenger. A multi-platform live chat solution like Heyday can bring all customer communication from Facebook, Google Maps, email, WhatsApp, and more into one unified inbox for your team.

Only Instagram ranks higher for brand research, at 62.3%. Without a solid Facebook presence, you’ll miss out on these potential customers who are actively researching what to buy.

24. Facebook accounts for 71.64% of all web traffic referral from social media

The vast majority of clicks through to websites are coming from Facebook. For comparison, Twitter comes in second place at only 9.02%. If you want to use social to drive traffic to your blog or online store, Facebook is your best bet.

25. Facebook removed 5,057,300 pieces of content in the first half of 2022 due to copyright, trademark, or counterfeit reports

Reports of intellectual property violations have risen steadily since 2019, though Facebook continues to develop detection and enforcement tools to keep it at bay.

A social media audit combined with a good social listening program gives your brand the best chase of spotting potential violations of your own intellectual property. 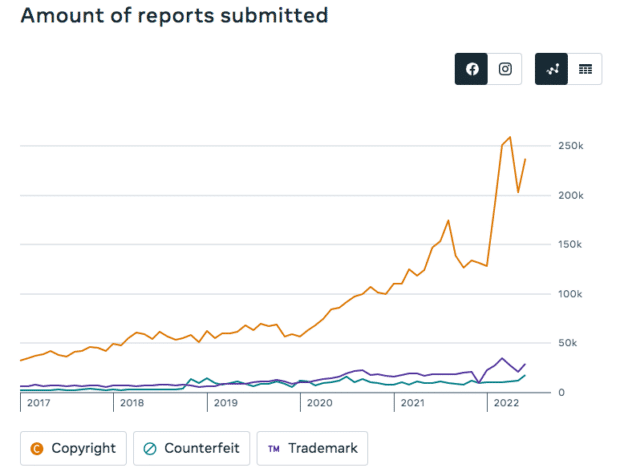 Facebook ad prices have been falling based on data challenges related to iOS updates and third-party cookies. While you may not always be able to target as precisely as in the past, there is ample opportunity to reach specific audiences with an interest in your brand, at lower rates.

27. For the five days between Thanksgiving and Cyber Monday, Facebook’s CPM dropped 37% y-o-y

Did your brand take advantage of this reduced cost? If not, it’s time to start planning your Facebook advertising strategy while costs are still low, because…

After reading those last two Facebook advertising statistics, you won’t be shocked to learn that the platform’s ad revenue dropped in 2022. But eMarketer predicts ad revenue will soon be on the upswing, rising to $71.32 billion in 2023 and then topping $75 billion the next year. 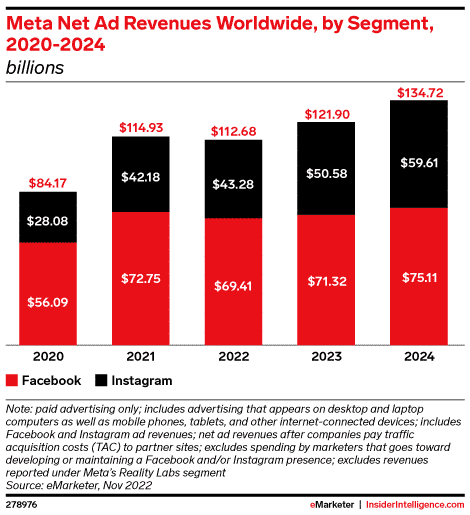 Since Facebook is the most populous social platform, it’s also the one with the highest potential ad reach. Again, for marketers serious about growth, Facebook isn’t optional.

Put into perspective, that 2.08 billion person ad reach is over a third of Earth’s entire teen-and-up population.

To save you the math, that means the audience is 43.6% female (since Facebook only offers male and female gender options). It’s easy to think of those as both being “around half,” but a nearly 13-point difference is significant. Here’s how it breaks down for each age group: 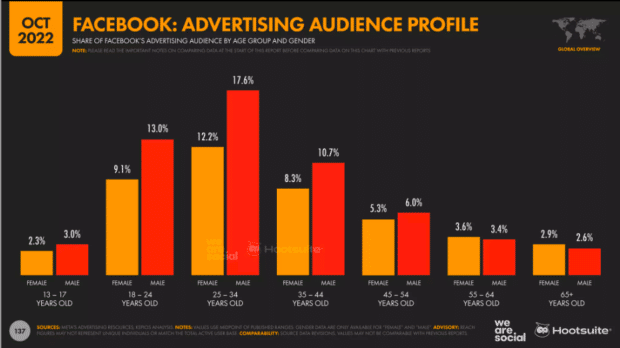 All the more reason to make sure you research your own target audience to understand where they spend their time online.

That’s the largest portion of Facebook’s ad audience. The next-largest group is Southern America at 12.1%.

That’s not surprising given the stat above, even in the face of declining overall ad revenue in 2022. For more geographic context, note that Facebook’s ad revenue decreased by 4% in North America during this period, and decreased 12% in Europe.

Facebook also reports these potential local advertising audiences as a percentage of total population over age 13:

35. The potential ad audience for Facebook Reels is 697.1 million people

To put that in perspective with other Facebook surfaces, here’s the potential advertising audience for other placement types:

For now, the Reels ad audience is smaller than the Stories ad audience, but Facebook is leaning hard into Reels. And when you consider the next Facebook stat, this gets really interesting…

Only 3.3%. But Reels ads have half the potential audience of Stories ads. Advertisers with a solid Reels advertising strategy can gain an advantage by getting in on this ad placement while it’s still a relative novelty.

Facebook is focused on growing this format in response to iOS changes that make it harder to retarget users who click through to a brand’s website. By keeping customer interactions within the platform, brands can see who’s engaged with their ads and can follow up directly. 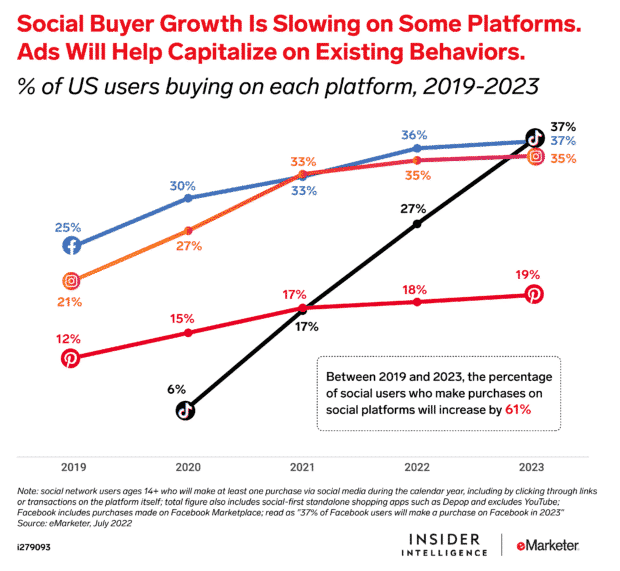 That percentage is tied with TikTok, but because of its much larger user base, Facebook wins in sheer numbers. Here are eMarketer’s estimated U.S. buyers on each platform in 2022:

But TikTok social commerce is skyrocketing (look at the growth trajectory on that chart!) and eMarketer predicts TikTok and Facebook will have equal numbers of purchasers in the United States in 2023.

39. 19% of U.S. consumers start their online shopping search on Facebook

It’s the top social network used for this purpose. The top overall source is Amazon, followed by search engines, Walmart.com, and YouTube.

40. The average Facebook Page in the retail industry sees 974,000 impressions per month

Retail pages see an average audience growth rate of 0.52% per month and post engagement rate of 1.37%. Want more benchmarks by industry? We’ve got a blog post for that.

41. Over 140 billion Reels get played every day across Facebook apps

That number, shared in October 2022, is an increase of more than 50% from May 2022. Reels are growing fast, and the time for a Facebook Reels strategy is now.

42. A new AI recommendations model led to a 15% increase in Reels watch time

Manage your Facebook presence alongside your other social media channels using Hootsuite. From a single dashboard, you can schedule posts, share video, engage your audience and measure the impact of your efforts. Try it free today.

Grow your Facebook presence faster with Hootsuite. Schedule all your social posts and track their performance in one dashboard.