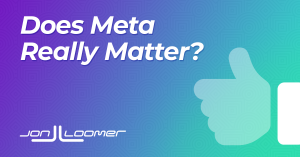 You have likely heard the news by now — because news travels fast. The Facebook parent company has been re-branded as Meta to reflect its future focus on the “Metaverse” (primarily AR and VR experiences).

First, let me be clear that I am no Meta expert right now. I’m figuring it all out like everyone else. More news will come out. But I wanted to provide my initial thoughts about this announcement.

Earth changing? No. A distraction? Maybe. But does it really matter? Sorta.

Let’s start with what this is and what it is not. The Facebook parent company is being replaced by Meta. Meta is the umbrella over Facebook, Instagram, WhatsApp, and Messenger. None of those names are changing. (Think Google and Alphabet.)

This is mostly about packaging. It’s arguably about distraction (during a heightened period of scrutiny and controversy around the Facebook brand). And it’s about focus.

Meta’s focus will be to bring the metaverse to life and help people connect, find communities and grow businesses.

In the past, the focus of the “Facebook” parent company has been the Facebook app. Now, it’s about the “Metaverse.”

Look, the “Metaverse” sounds like a silly, science fiction concept from a movie created in the 90s about what life was supposed to be like in 2021. It sounds like a made-up word that over glorifies something that isn’t really a thing yet.

And that’s kinda what Facebook (dammit, META) is doing here. They’re betting everything on the “Metaverse” — a world where Augmented Reality, Virtual Reality, and social experiences collide. Our lives move into the virtual world.

And that’s something that really hasn’t been pulled off yet.

The metaverse will feel like a hybrid of today’s online social experiences, sometimes expanded into three dimensions or projected into the physical world. It will let you share immersive experiences with other people even when you can’t be together — and do things together you couldn’t do in the physical world. It’s the next evolution in a long line of social technologies, and it’s ushering in a new chapter for our company.

It’s a concept we can start to grasp as being a bit more realistic during these pandemical times. Virtual meetings. Virtual gatherings. Experiences without leaving your home. Sit courtside at an NBA game while sitting on your couch. All that.

But very few people are doing that AR/VR “thing” right now. Facebook/Meta are betting that people will. That that’s where we’re headed. That they can bet their branding on it.

It feels like we’re years away from the Metaverse being a mainstream “thing” that is as ubiquitous as Facebook is now. And maybe that level of ubiquity is even further away, or will never happen.

That said, there’s certainly money behind this effort. And when there’s money, there’s a way. The question is whether the general public will buy in.

The “So What” is about how we — marketers and advertisers — fit in. You need to have some imagination to visualize something that doesn’t exist yet. But, if social and the web start moving towards this Metaverse-like experience, our lives are going to change drastically.

If someone is immersed in a Virtual World, how might advertising show up? How might that experience be sponsored? As something they can “hold” or “feel” in this world?

How will coaches and educators and public speakers and personalities show up in this world? Will we conduct virtual conferences? Will agencies hold virtual meetings with clients? Will I hold virtual strategy sessions with members?

What hardware will we need? Will it be accessible for all? Or will it be a perk mainly for the wealthy?

It’s not like the online experiences we’re having now. It’s not about sitting in front of your webcam anymore. Instead, it’s everyone wearing a headset, sitting in a room together (but not really), immersed in some weird world.

I’m sure that the folks at Meta have a much clearer picture of how this may turn out. It’s all so conceptual to me (and I’m sure many).

The main thing is to be prepared. Be flexible. Be ready to evolve. You can’t keep doing things the way you always have.

If Meta is right, everything is going to change. And we will need to change with it.

The Principles Will Remain the Same

This all can sound scary, particularly to those of us who have been doing things a certain way for a long time. But many of the principles will remain unchanged.

Get attention. Build trust. Stand out. Brand loyalty. Honesty and integrity. Build an audience. Maintain communication with your core people.

All of that stuff will live on. It will always be important. The methods to achieve them may change.

Oh, and we can be certain that some marketers will find a way to ruin it all. Because that’s the one thing that will never change.

My initial assumption was that this change would be mostly superficial. That it wouldn’t spill down into Facebook marketing and advertising. But then, I saw this… 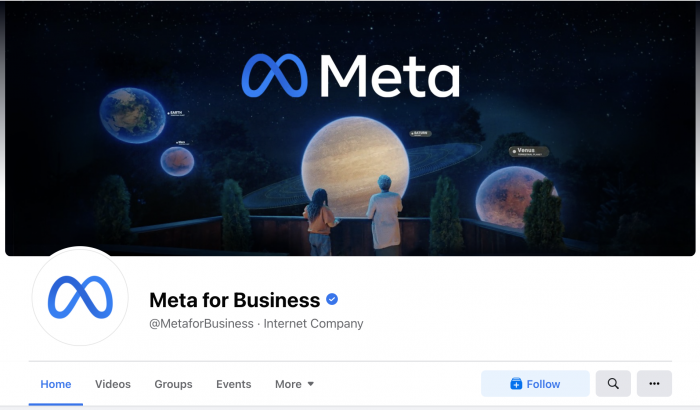 Does that mean that I will be frantically updating this website to replace all references to “Facebook” with “Meta”? Is this website intended “For Advanced Meta Marketers” now?

First, that sounds kinda cool. Second, I hope not.

It’s still superficial. It may create a whole lot of headaches. But be aware.

What are your thoughts on this change? Does it matter?