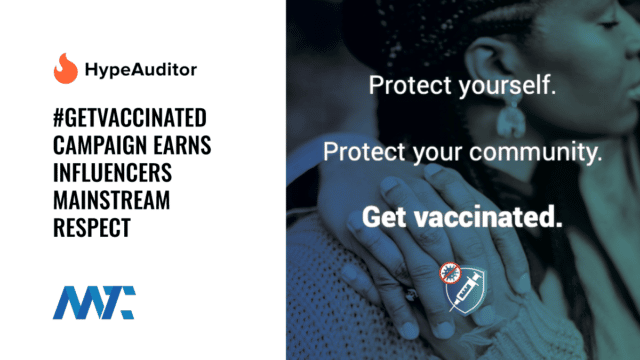 Even before the first COVID-19 vaccination was administered in the U.S. in December 2020, high-profile figures in entertainment, government, healthcare, and business were imploring Americans to get vaccinated. After an initial surge, however, the pace of vaccinations fell even as the vaccines became more widely available and the list of people who were eligible to get them grew.

While no amount of effort would convince everyone who could get vaccinated to do so, there are certain groups of people who could be persuaded, just not by banner ads or Dr. Anthony Fauci. In that respect, the push to get people vaccinated exposed the limitations of established PR, marketing, and advertising tactics in reaching certain demographics and, in doing so, earned an emerging medium – social media influencers – mainstream acceptance and appreciation.

Thanks in large part to a $1.5 billion PR and advertising blitz launched by the White House in March 2021, 41% of the population was fully vaccinated by the end of May, according to data from the Centers for Disease Control and Prevention (CDC). But the effectiveness of those traditional outreach efforts seemed to wane as summer approached, and the pace of vaccinations slowed.

The White House needed a new, more surgical approach to address the pockets of vaccine uncertainty and hesitancy that existed throughout the country. The administration decided to recruit an army of influencers to push back on vaccine misinformation and increase awareness among groups that their research showed were resistant to getting the vaccine not due to religion or political ideology, but for more personal reasons.

Members of Gen Z lamented the fact that public health officials weren’t tailoring their messages to the Instagram generation. For instance, a 22-year-old woman quoted in the life sciences-focused news outlet STAT in April pointed out that none of the messaging at the time explained why a healthy 19-year-old should get the vaccine.

A look at Instagram data is useful in understanding why the White House turned to influencers to reach people like her, and helps illustrate how that initiative seems to have spread organically across the influencer realm. In the first eight months of 2021, 9,000 Instagram influencers in the U.S. made a total of 14,000 posts encouraging their followers to get vaccinated and incorporating the hashtags #vaccinated, #getvaccinated, #vaccineswork, #fullyvaccinated and #getthevax. Those posts were directed at an audience totaling nearly 61 million people, of which 32% were in the 13-24 years old age group. Large chunks of that number came from posts by household names like Reese Witherspoon, with over four million followers, and Oprah Winfrey, with three and a half million.

But in the influencer world, bigger isn’t always better. Just as important as the total size of the audience is the fact that 58% of the posts came not from marquee names but from nano-influencers, those with follower counts between 1,000 and 10,000. Followers of nano-influencers are known to be highly engaged and loyal, displaying a level of devotion and, yes, influence that even the beloved Dr. Fauci can’t touch. By sharing their own stories of their vaccination, and encouraging their followers to consider it, the influencers displayed an authenticity that could not be found in government-sponsored advertising campaigns or health-official entreaties peppered with medical jargon.

To be clear, influencers have not been a silver bullet in the push to get people vaccinated. While the vaccination rate climbed to 41% in the first few months after the vaccines became available to the public, the percentage of Americans fully vaccinated has climbed only an additional 14% over the past five months [to 9/20]. As any good marketer will tell you, fear sells, and the misinformation and anti-vaccination rhetoric being parroted everywhere from cable news to kindergarten classrooms guarantee that this is an issue on which we’ll never reach national consensus.

The vaccination rate among young people ages 12 to 17, one of the demographics the White House hoped to target using influencers, grew from 18% in mid-June to 45% as of September 20 according to CDC data. And regardless of the figures and percentages, there’s no question that influencers have a huge potential to use their platform for good. Spreading a community-minded message that will hopefully persuade more Americans to protect themselves from COVID-19 is just the most visible example to date, and it certainly won’t be the last.

With the return of social distancing and mask mandates due to the Delta variant of the virus, brands and businesses would be wise to follow the White House’s lead and consider influencers an essential element in their efforts to encourage people to get vaccinated, not to mention an increasingly important tool in their general marketing and public relations toolbox going forward.