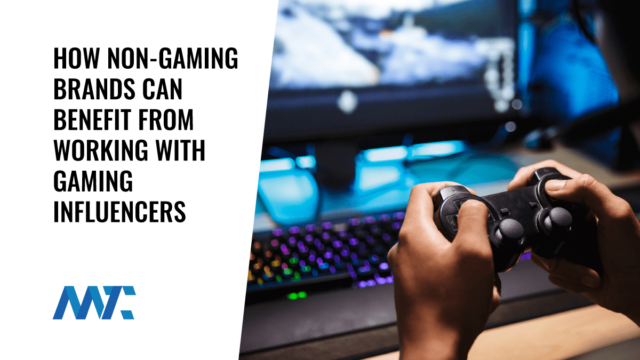 Gaming influencers are becoming hard to ignore, even for non-gaming brands. That might sound strange, so let’s explain why.

Many industries suffered due to Covid, but video gaming exploded. Its value is projected to surpass $200 billion in 2023, growth powered by an estimated 2.9 billion gamers worldwide in 2021.

It’s not only numbers that are exciting for non-gaming brands, but the diverse ecosystem around gaming. Diversity creates opportunities to present your brand in different ways and reach audiences you’ve previously struggled to engage with. Video game livestreamer ranks as one of kids’ dream jobs, with the livestreaming market expected to reach 920.3 million people in 2024. The rise of esports is also significant; it’s expected to reach 577.2 million people by the same year.

With nearly 40% of media value being driven by non-gaming brands, marketing to gamers is inevitable. First-mover advantage is crucial in order to learn and understand gaming marketing before your competitors. But first, you need to understand exactly what gaming looks like in 2021.

You may think gaming is dominated by teenage boys with unlimited free time—but this couldn’t be further from the truth. 83% of women and 88% of men can be classified as gamers. And while it’s true gaming is most popular among young people, 71% of 55-64 year-olds play too. When it comes to location, gaming is global. 45% of Danes claim to play games vs. 82% of Thais, but the world’s biggest economies are consistent in having strong engagement, which is vital for marketers. Gaming interests and preferences also vary across life stages, ethnicity, and sexual orientation.

With this level of diversity in gaming, it’s clear traditional stereotypes don’t hold up. But how does this benefit your non-gaming brand? It means you’re certain to find gaming influencers which are a natural fit for you.

The Value Of Gaming Influencers To Non-Gaming Brands

Gaming influencers naturally understand the industry and—crucially—gaming culture. Their audiences are die-hard fans, heavily engaged and similarly enveloped in all things gaming. Gaming is digital; gamers are active, sophisticated media consumers. Campaign tactics that worked for you traditionally may not work here, especially if you don’t tweak them. It’s a conversation of Twitch or YouTube, not TV or social media. Advertising in games has to make cultural sense or you’ll alienate your audience, and influencers are a perfect way to promote your brand endemically.

What does partnering with gaming influencers give you access to? Diverse audiences which may not be found elsewhere—particularly on the same scale. Twitch streams are usually hours long, with its live chat feature enabling constant communication between streamer and audience. YouTube Gaming hit over 100 billion watch time hours in 2020, an almost unfathomable number. But it’s not all about size.

It’s the authenticity of gaming influencers that resonates with their audiences, creating a highly-engaged relationship. In September 2020, the gaming industry saw the highest average engagement rate of 9% from nano influencers (1,000-10,000). Mega influencers (1 million or more followers) had the second highest rate at 5.24%, suggesting even the biggest gaming celebrities are able to consistently command their audience’s attention. Gaming content feels real to people, and native tools such as Twitch chat are designed to amplify that.

How Your Brand Can Collaborate With Gaming Influencers

There are various ways of collaborating with gaming influencers. Below are the primary methods we recommend to non-gaming brands.

The Reach Of Gaming

The gaming industry is no longer the exclusive subgroup it once was. Gaming is global, and it represents legions of fans across ages, genders, and ethnicities. While gaming brands are unsurprisingly entrenched in gaming marketing already, there’s a huge opportunity for non-gaming brands to capitalize on a previously untapped audience.

Gaming influencers represent the standout method to access gaming audiences. There’s a variety of ways to get creative and generate brand awareness and sales around your brand. Remember to keep in mind that gamers are sophisticated consumers. It’s critical your gaming influencer campaigns are tailored to the industry and the specific influencers you select.