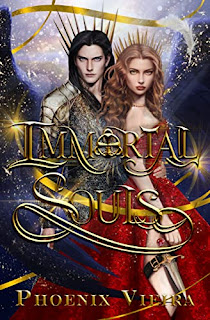 You can tell the author has put a lot of work into this (14 years in fact) and it really pays off with this intriguing, detailed novel.
Its got fae and a forbidden romance, two things I absolutely adore. It felt fast paced and the chapters were short and I was hooked. There’s also a fallen empire which was portrayed perfectly.

Immortal Souls is the fast-paced first book in an epic new fantasy series that blends unexpected mythology and faerie lore, romance and intrigue into an unforgettable read.

A fallen Empire. A forbidden royal romance. An ancient treaty with the Fae.

In a world tainted by greed and rebellion, death prowls the shadows of the once glorious Sun Empire, waiting to devour those who dare fight back.

Corvus, heir to the most powerful House, is a threat to the Emperor, despite being the dearest friend of Crown Princess Saphyr. When the Emperor forbids their friendship, Corvus forms an Alliance to overthrow him, until betrayal forces Corvus into exile.

After the lethal Queen of the Sirens emerges from the secret realm of Sirenibus, Corvus is tempted by an irresistible deal at a dangerous price. Caught up in a conspiracy and a war between light and darkness, can he and Saphyr save the people from a terrible destiny and restore the Empire to its former glory? Or will Corvus have to sacrifice more than he is willing to give? Will his life be enough, or will it also demand his soul?