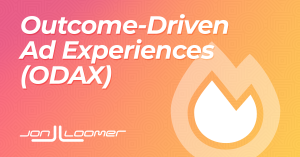 This update is, as always, a slow roll-out. As of the date of writing this, I don’t have it. That limits the amount of information I can provide.

But, there is some info available. I wanted to at least provide an overview of what I know so far, an interesting mystery, and some overall thoughts.

Facebook is constantly adding, removing, and changing functionality. Flows are changed. The overall design doesn’t. As a result, the process of creating a campaign has become increasingly complex and confusing, particularly for newer advertisers.

Facebook is moving towards Outcome-Driven Ad Experiences (ODAX). After selecting your desired outcome (the objective), the advertiser will be guided to the most optimal set-up.

Granted, that sounds exactly like how the current/prior process (depending on what you have now) is meant to work. Now, it just has a fancy name. But, that process has gotten messier over the years, and ODAX is evidence of prioritizing a cleaner and less confusing organization.

The easiest way to explain this update is that the objectives will be simplified.

The biggest change for advertisers will be moving from 11 campaign objectives to six (image from Facebook): 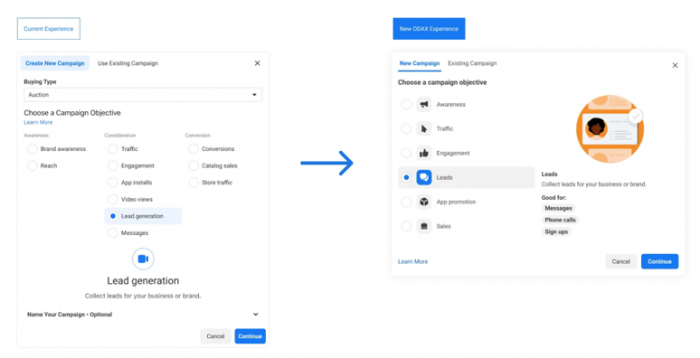 The new objectives, using ODAX, will be:

That doesn’t mean that five objectives are necessarily going away and that you’ll lose options related to those objectives. It simply means that some are redundant and are being combined (again, from Facebook). 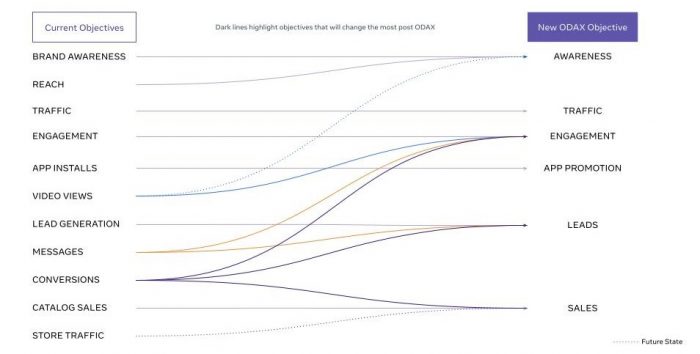 As you can see in the image above (this may be clearer), the new objectives will include prior objectives as follows:

Note that Store Traffic won’t be included in the original roll-out.

Facebook has said that nothing will actually change. In other words, you won’t lose functionality that you previously had, and it doesn’t appear that any new functionality emerges. This is all a matter of simplifying and making the flow more logical and less confusing (or at least that’s the goal).

I don’t have this change, however, so I can’t go through the process to verify whether anything else has changed. Most importantly, I’m curious what the optimization options will be at the ad set level for each objective.

One of the changes that jumps out at me is moving to Leads and Sales. The prior “Conversions” was used for any type of conversion on your website, whether a lead or a purchase. It appears that Facebook wants to separate value-based conversions under the “Sales” objective. My assumption is that all lead types (Facebook lead ads and website leads) are combined under Leads.

Again, though, it at least appears that nothing is truly changing — just the flow for how you get to your eventual goal.

There’s one passage within Facebook’s announcement that got my attention. Facebook lists three reasons for wanting to simplify the objectives. Check the second one:

2. Enable cross-channel campaigns: Once Cross-Channel Conversion Optimizations are available (e.g. website + app, website + shop), communicate the value of, and default advertisers into, these solutions make it easy for advertisers to adopt.

This wording (“ONCE Cross-Channel Conversion Optimizations are available…”) certainly makes it sound like new stuff is coming. A new cross-channel attribution tool? New optimization options? Not all that clear.

But, it could be a big deal! Or maybe I’m reading too much into it.

I will write another post once I have some hands-on experience. But, this is a start.

Do you have this update yet? Is there any information that you can add or clarify?