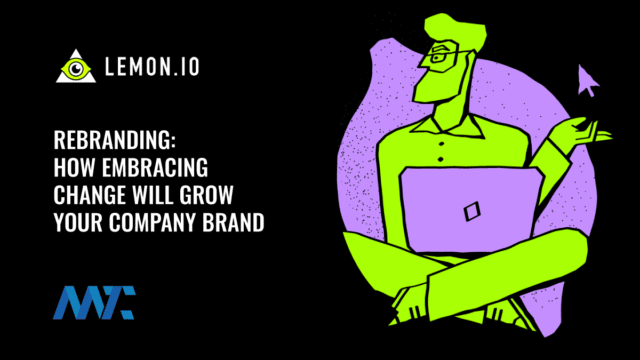 It goes without saying that rebranding can produce tremendous positive results for a business. And you know this is true when the very companies that specialize in creating brands are the ones first to rebrand.

About 58% of agencies are rebranding as a way to boost exponential growth through the COVID pandemic.

We at Lemon.io have experienced firsthand how much rebranding and consistent brand representation can put you ahead of your competition. However, we have also learned the hard way that as simple as rebranding might sound, it is more than just developing a new logo or getting a new name. Instead, it’s a continuous process of creating and maintaining a new identity — consistently conveying the message you want your customers to associate with your brand.

A good brand across all platforms significantly increases an organization’s revenue by up to 23 percent.

LucidPress, The State of Brand Consistency

And this is to mention just a few. In this short and to the point article, we will walk you through the rebranding process, share tips, reveal the common pitfalls, and show you how to dodge them.

It only takes 7 seconds to make a solid first impression.

That means seven seconds might be all you have to convince a potential client to choose you over your competition. While this is a hurdle on its own, continuously convincing customers to keep choosing you is even harder. This realization led us to the success we busk in today.

Let me briefly let you in on the history of lemon.io.

Lemon.io was initially developed in 2015 when the founder (Aleksandr Volodarsky) identified a gap in the freelancer hiring niche. At that point, branding was the last thing on our minds. Like most new businesses, we made mistakes at the beginning of our journey, one of which was naming ourselves “Coding Ninjas.” Believe me, it sounded right at the time because it was trendy, and we had placed most of our focus on content creation.

However, we got a rude awakening when we discovered that business growth had slowed down and content alone was not even close to being sufficient for the success of our business. We needed much more than that to make it in the highly competitive freelance hiring world. This is when our rebranding story began.

There are a lot of exciting lessons that we learned in our rebranding journey, and we hope that, as we narrate our story, you may also pick up a few that will benefit your brand.

Why A Rebrand Was Needed

You may be wondering why we had to rebrand and of what importance it was.

Well, besides the fact that we were way past the era of Ninjas and Rockstars and shared a primitive-sounding name with a programming school in India, we also realized we needed to be proactive to survive in the highly competitive freelance market. The niche of vetted freelance marketplaces is so congested that the only way to stand out is to have a strong and stellar brand.

Initially, we believed that our failure was due to our design, and we were quick on our feet to approach a designer and asked him to redesign the blog, to which he politely declined and suggested total rebranding. That was the final nail in the coffin, and it was at that point,  the need to rebrand became apparent. In fact, we realized we did not have a brand at all, and as such, we needed to create one. This remains one of the boldest and most rewarding decisions we have ever made as an organization.

Here is a step-by-step snippet of how we carried out the rebranding process.  Our guidelines are not exhaustive; however, we will be as generous as possible with information from our experience. Here is a summary of the steps we followed:

The intangible benefits of rebranding include that it brought us confidence, inspiration, a sense of meaning and purpose, not to mention the enviable influx of leads.

And, of course, what matters most is the effect that rebranding had on our bottom line. The best way to express this is through the figures because numbers do not lie.

The results were tremendous and saw us reaching almost 60% of the total traffic benchmark gained in the previous five years within ten months of launching our Lemon.io brand.

A complete rebrand saw us moving from 4K visitors to 20K on average on our best month. We got to a remarkable increase of 5 times our visitors and sales putting us on track for a 10M GMV in 2021. Check these graphical representations of this growth:

Before: Coding Ninjas traffic from the beginning of the company and up until rebranding:

After: Progress made within nine months of rebranding.

When should you rebrand if you are a startup (based on Lemon.io experience)?

Timing is everything. Rebranding requires a lot of work and consumes a lot of resources, and it is important to make calculated decisions.

When is the perfect time for rebranding?

At Lemon.io, we knew it was time to change the corporate image of our organization when:

When is it not the right time for rebranding?

Rebranding should never be carried out without solid reason. You know your motivation for rebranding is amiss when it stems from emotions rather than facts.

Rebranding as a future investment for your business

It is an undebatable fact that despite the serious expenditures of time and resources during the renovation process, rebranding is always an investment in the future. The end justifies all the hustles involved in the process. As we previously illustrated, the numbers indicate a significant increase in sales after we rebranded. The process was kind for both our bottom line and our corporate image.

The process of branding or rebranding is a very taxing task characterized by more highs and lows than it may seem from our story. It takes prudent planning, correct timing, and sufficient resources to get it right and create a brand that will really make a statement, improve your earnings and improve your public image. Rebranding also means making improvements to keep up with the times.