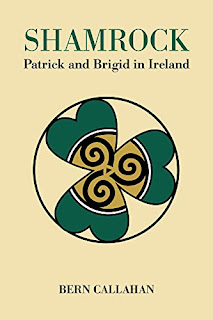 Shamrock offers the reader a tale of magic, romance, intrigue, and adventure.

The book is fun!
5th century Ireland serves as the backdrop for this tale of Pagan Ireland’s encounter with Patrick and Christianity.
3 questions sparked my writing this tale:

1) Where are the women in the story? Patrick’s story is often shared as if he was a bachelor, a bishop, and not married. BUT – this tale is set in the 5th century, long before priests and bishops were prevented by law from marrying. And this is 5th century Ireland, a time when women held power, could be chieftains or warriors, a time when women could be druids. Pagan Ireland had a rich spiritual tradition that included honoring the Goddess. So, inside this rich background, a story about Patrick that omits women is simply incomplete.
Patrick would never have succeeded in his mission if he didn’t earn the help, support, and love of Ireland’s women. So, where are the women?

2) Why didn’t the cheiftains and warriors of Ireland simply kill Patrick when he returned. Patrick was an adult, escaped slave who returned. His presence risked putting the dangerous idea into the minds of other slaves that they too could escape. It would have been safer, and more usual, to kill him on sight. To avoid immediate death, Patrick needed to be clever, charming, and likeable. He needed to be more than a 2 dimensional holy man bringing a foreign religion to Ireland’s shores. Why didn’t they kill him?

3) 5th century Ireland had a flourishing culture with its own religion, laws, legends, and social structure. Patrick’s arrival threatened to upset the balance of this culture. Yet, the Irish not only didn’t kill him, they welcomed him and transformed their entire culture around him. Patrick must have brought something with him that was of great value to the Irish. The novel avoids an easy explanation relying on divine intervention or miracles and looks to answer the very human question of what did Patrick offer the Irish? For example, what was so valuable to the cheiftains that they were willing to risk change?
Clue, it didn’t involve leprechauns, miracles, or green beer.

Shamrock introduces you to a Patrick you’d like as a friend, a Patrick you might even fall in love with. Ireland did.