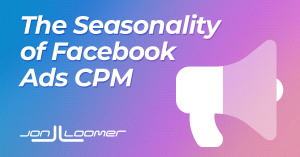 As a Facebook advertiser, you must understand the seasonality of competition and CPM (Cost Per 1,000 Impressions). This one metric — often ignored — can turn an ad with a high conversion rate into a poor performer.

If you advertise all year long, know that it’s going to be much tougher this time of year. It doesn’t mean you can’t advertise profitably. But you need to be aware of the landscape and how it impacts your performance.

The Seasonality of CPM

CPM — the cost to show your ad to your desired audience — is driven by several factors. You’re competing with millions of other advertisers in the Facebook ads auction. The price is driven up in that auction due to things like ad quality, audience size, and competition.

The infusion of ad dollars results in less inventory and more competition to reach the same people. The result is an increased cost just to reach those people.

The Impact of Increased CPM

Imagine this: You’re running ads in October. Those ads are profitable. Two months later, your cost per conversion skyrockets. But little else changes.

Why? The CPM went up.

Of course, that increase in CPM was during “normal” years. We’re in uncharted territory now in these weird times. Last year, quarantines resulted in a rush to go online. It’s possible you won’t see the CPMs you saw this time last year.

But you absolutely should see an increase when compared to earlier in this year.

You Can Still Be Profitable

I realize this all sounds awful, but don’t lose hope. You can still be profitable during the holidays!

The truth is that there’s a reason there’s more competition during this time. People are more likely to spend during the holidays, so that conversion rate you’ve been getting until now should improve.

People love deals, so offer those discounts and sales now. Position your products as gifts, if you can.

The main thing to understand is that it will be very difficult to succeed if you continue to do things the same way during the holidays as you have all year long. It’s going to get harder. It’s going to cost more simply to reach the audience you’ve been reaching.

First, it’s entirely possible that you can’t take advantage of the holidays and the increase in CPM will result in poorly performing ads. Maybe you’re in a difficult industry that struggles to fit into a gift-giving season. No deals, no discounts, no difference in your product or service.

It’s possible that you may need to pull back or even turn off ads during this time. There’s no shame in it. Keep an eye on what’s working and what’s not, and understand what you’re up against.

Ultimately, see the holidays as a challenge to outwork other advertisers. You know what you’re doing. Some are simply seasonal, and they’ll struggle to hit the ground sprinting without priming up an audience all year long.

The holidays are a challenge, but it’s a challenge you can win. Good luck!

Have you been seeing an increase in CPM during the holidays?

The post The Holidays and the Seasonality of Facebook Ads CPM appeared first on Jon Loomer Digital.