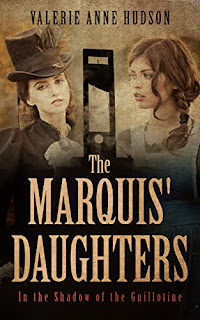 The Marquis’ Daughters: In the Shadow of the Guillotine tells the tale of two daughters of a noble family trying to survive the French Revolution with its thirst for the rolling heads of royals and nobles. These sisters belong to two different mothers. One was born as a legitimate child with the splendid upbringing of the nobility. The other was illegitimate, her father’s secret, who grew up to be the lady’s maid of her half-sister. Both mothers lost their lives to the pox, and both daughters had their lives changed forever by the Revolution. In an unusual twist of fate, the illegitimate daughter gets the chance to live the glamorous life of her half-sister, while the legitimate daughter experiences the hardship of her half-sister’s life. The outcome of their new life trajectory is not like anyone or any of them would have expected.

Will Odette find happiness in her life as an aristocrat? Will it be everything she has dreamed of, or will she crumble under the constant threat of being arrested and executed as a royalist?

Will Marie survive in a world that doesn’t answer to her beck and call? Will she be able to return to her family, or will she perish in the streets among gangs of rioters, thieves and beggars?

The Marquis’ Daughters is a classic coming-of-age story that thrusts the reader directly into the turbulence of the French Revolution. In the historically accurate descriptions of Paris in the 1700s, the reader will be faced with unexpected and uncanny similarities to life as it is today.