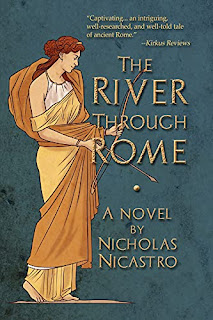 In the waning years of the Roman Republic, a talented engineer is tapped to bring water to one of the city’s most notorious slums. Nonius believes he is doing good for his city, but he isn’t counting on the many obstacles that prevent anything from getting done in those turbulent times. His troubles multiply when he falls in love with beautiful, haunted Amaris, concubine of a senator who is determined to stop Nonius’ aqueduct from going through. The clash between them runs from the bedrooms to the streets to the courtrooms of the Eternal City, in one of the most fateful periods in her history.

Nicholas Nicastro (Empire of Ashes, The Isle of Stone, Hell’s Half-Acre) writes the kind of vivid, deeply immersive historical fiction that brings the past to unforgettable life. In The River Through Rome, he tells a story that is both faithful to its time, and hauntingly presages our own.

“This historical novel gives readers a view of ancient Rome from the rare perspective of a good man just trying to do an honest job…Nicastro is an experienced and accomplished writer and often a prose poet in his descriptions of Nonius and Amaris: ‘If his life was a stem, she was the rose,’ and ‘Trapped there, between the Scylla of oblivion and the Charybdis of inconsequence he was powerless to go on.’ This is a Rome falling fast from greatness, though oblivious to the descent. The Republic is dead; Octavian will soon style himself ‘Augustus,’ a god. Sycophancy and cynicism are the orders of the day. The captivating book does, in fact, provide an excellent slice of history…An intriguing, well-researched, and well-told tale of ancient Rome.”

“Nicholas Nicastro has a gift; the ability to look past the deeds of the great and powerful to find the beating heart of Antiquity. Rome might be the legacy of Caesar and Augustus, but it was built by men like Lucius Nonius Donatus — working men whose passions and perils, loves and losses, have remained unchanged for over 2000 years. And this is Nicastro at his absolute finest: breathing life and humanity into the lifeless marble and concrete of ancient Rome. Fans of Robert Harris and Colleen McCullough, take note!”

—Scott Oden, author of Men of Bronze and Memnon