By now, we’ve all seen them on LinkedIn: The customary posts celebrating the interns. 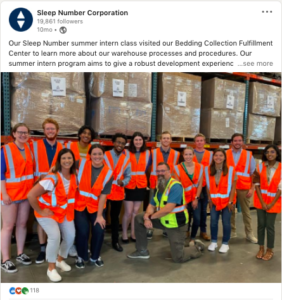 It’s usually a late summer/early fall post, showcasing the summer interns, but I’ve seen them throughout the year as interns start at different times of the year now.

I love seeing these posts. Especially as an adjunct who is starting to see some of his students in these posts now! We need to recognize our young people for they are our future.

However, on the opposite side of the spectrum, we rarely see posts from companies celebrating their retirees. I’ll even broaden in a bit from there–we rarely see companies highlighting employees with 35+ years experience in the market.

I realize our culture prizes youth–and, for some reason, does not hold experience and seniority in the same light.

I realize companies are using those intern posts to recruit new, young talent.

And I realize many companies are built on youth–predominantly, the notion of hiring young people at less cost and making millions off their labor.

However, even given all that, what’s the downside to showcasing our senior-most employees?

Those who showed us all the ropes.

Those who mentored many of us for years.

Those who paved the way for many of us.

Why would we NOT hold those people up as they near the end of their careers? 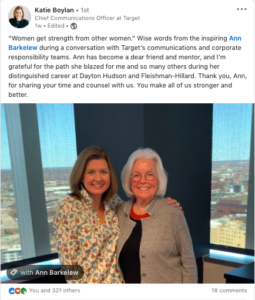 Because these senior-level employees deserve it. And keep in mind, when I say “senior level” I don’t mean only people at the director and VP level. There are plenty of employees 50+ who don’t have fancy titles–and those people are just as valuable and cherished as the others.

In some ways, we have a responsibility to hold these people up. For all the reasons I mentioned above. For me, here is just a short list of senior-level people who have mentored me and paved the way for me over the years:

I think about this from an Employer Brand standpoint, too. I see a number of advantages to highlighting older employees:

1 – The 50+ crowd has a lot of experience, which can be invaluable right now as companies fight for talent. And often, these folks are not looking for huge paychecks. Often, they are people with kids who are now out of the house who are trying to find fulfilling work where they can make a fair salary.

2 – The 50+ crowd makes great mentors to your younger employees. In some cases, these folks are looking for these opportunities. And again, they’re not all looking for VP jobs–the lion’s share of them aren’t! So, why not hire them for mid-level jobs and let them mentor your star, younger employees?

3 – It demonstrates your commitment–to all ages. Showcasing your most senior employees has another hidden benefit from an Employer Brand standpoint: retention. Think about all those mid-level employees in their 30s and 40s–they’re the next senior-level group! If you start showcasing your senior-most people, they know you will value them, even when they break that 50-year mark.

The post Why don’t we celebrate retirees with the same fervor we do interns? first appeared on Arik Hanson.